In the continuing saga of VAN Interconnections wielded as (instruments of) GXS’ anticompetitive leverage against besieged Loren Data Corp, I often refer to the tortured history of the AT&T divestiture that occurred over a period of some fifty years , the creation of two new Federal Agencies, and finally, the wrap-up of a consent decree that barely made anyone happy. I make particular reference to Kingsbury, an AT&T executive who, finally, compromised in principal with the interstate commerce commission (predecessor of FTC), and agreed not to pursue acquisitions of local telecoms quite so aggressively.  Whether Kingsbury actually delivered on his commitment is open to debate, but the record of his commitment mark an important point in the life-cycle of the AT&T behemoth in acquiescing to the reality of competition – albeit at the point of a government spear. But the Government would never have taken any initiative to act, had it not been for Bill McGowan, MCI’s Chairman, who started the Civil Antitrust actions against AT&T – and after many long years, won the rights to operate as a competitive Long Distance carrier with interconnections to AT&T’s network. We owe Bill McGowan a great deal. Now, Mr. McGowan is honored with the retelling of his inspiring story on PBS and other outlets, in a documentary called. “Long Distance Warrior“.

It’s good to reflect on what could have happened had AT&T won the right to maintain its monopoly over telecom services in the US market,  as well as the other North American markets and other franchises they had a grip on, such as transatlantic submarine cables: We would never have seen a whiff of the innovations that we take for granted. We would all undoubtedly be paying huge rates for intrastate calls, to say nothing of interstate and international calling rates. AT&T had become so powerful, with reserve cash balances exceeding the US Treasury. So many cases against AT&T fell into place once the national and legal consciousness got up to speed after the divestiture, and the seminal case of equipment attachment in Carterfone.

In the VAN world, the real interconnection problems are not about interconnections at all – these are party to party, reciprocal traffic routing exchanges that are not VAN business per se, but are routing agreements for the benefit of the users. Cooperative traffic services built the market for GEIS/GSX/Inovis/IBM Advantis before they were rolled-up, and the entire cohort of “legacy” VANs partake in these traffic routing agreements, thus insuring EDI users are not forced into sitting on one dominant VAN. Interconnections are the ultimate market lubricant, not mere technical agreements used to convey message traffic. Think on this.

The present difficulties between Loren Data Corp ECGrid and GXS TGMS is based on two forces being exploited by GXS: Traffic transfers between trading partners of unequal influence (large retail hubs are a must have route for the suppliers), and the primitive, outmoded architecture of VAN to VAN routing. Let me explain first:

The world of EDI networks will need some type of Transit Police if fair rules for InterVAN message transit cannot be established. Without such tariffs or FCC involvement, we will have more cases of routing arbitrage like Loren Data v. GXS . What has worked up until now, the agreements between collegial EDI networks, has been broken at a fundamental level. So, even when networks cooperate, the methods used to add, drop, move, and update Network ID’s and subscriber information is just a mess. The small VANs might have <5K network Id;s, the largest have well over 40,000. Loren Data Corp ECGrid is growing fast – moving up from a stable cohort of 19,000, and then busting out with the introduction of the ECGridOS API – ECGrid now is closing in on 22,000 ID’s, and is looking at a potential 30,000 if all of the current agreements are realized. If the EDI industry could just get its act together on directory services and ID portability, we would be halfway there to a fairer, flatter VAN market where any decent, competent network could connect to any one of several competitive pure transit providers, and thereby be connected to all of the VANs and hubs. That’s how things work on the Internet with Pure peering and paid transit. We could also expect more functional and innovative network level services that the current community of service providers and VANs could build new products and features upon.

So the first exploitation on GXS’s plate has been stifling the entry of new VANs and Service providers into the market, by not participating in cleaning up routing and directory services (network level services), as befits the largest EDI network in the industry – a leader, a steward of fair practices, a company that competes on its merits – we do not find this in the current corporate persona of GXS.

ECGrid, as an independent innovator, is not permitted  to interconnect with or route traffic in a native manner to TGMS, whereas the entire cohort of approximately 40 North American VANS plus a dozen or so European EDI networks do have such reciprocal agreements with GXS-TGMS. Therefore the prospects for Loren Data Corp competing in the market is diminished, as ECGrid is technically and financially disadvantaged compared to other networks that interconnect to GXS-TGMS.

Let’s face it, GXS took a lot of money from Francisco Partners and Golden Gate Capital, and used that capital to purchase IBM-IE, Inovis, and a plethora of supporting EDI properties. By gaining such clients via these acquisitions, (many are major retailers and manufacturers with large, diverse down-line trading partner networks) GXS has used the power of these TGMS homed clients to leve

rage Loren Data Corp who serves the EDI service providers who, in turn, service those parties who trade with GXS clients – get it? These are parties who are bound by a relationship to do business, well outside of any consideration of GXS, and have chosen a Service Provider, who has chosen ECGrid as a preferred EDI transit network, and…GXS has not permitted the data belonging to these parties to be conveyed to its natural destination. If  FedEx, UPS, USPS, (or any provider that takes the bailment of a customer’s messages or property) played such games, there would be hell to pay at the FTC. VANs, living under the FCC’s radar, existed prior to the 1996 telecom reform act, but they were providers of wireline conveyed services before the advent of the Internet. Maybe VANs of a certain size should be tariffed?

GXS grants reciprocal traffic exchange to just about every major and minor VAN, even their arch rival IBM-Sterling Commerce, and refuses to exchange traffic in alike manner with ECGrid – so we need EDI Transit Police. 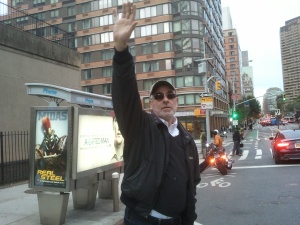 Loren Data Corp, under the direction of its intrepid President Todd Gould, has sought relief in the Antitrust laws, and has struggled somewhat to properly answer the well-funded GXS and its hired legal guns – and now the company is bound for the FCC’s administrative rule-making process. After all, in the words (Paraphrased) of Bill  McGowan, the Chairman of MCI who took AT&T to task, ” Are we just going to let these huge companies dictate who can compete? We just want a chance to bring a new idea (Competitive Long Distance) to market, just a chance to try a new thing.”

Well, that’s what Loren Data Corp wants to do: trying for the last ten years to bring a new type of EDI Communications to market with open APIs, pure transit, and better network management tools. Granting managed peer level access to its clients, as opposed to mailboxes, where any company or service provider-developer can become its own network commander. But when a network the size of GXS singles out a company 1/500th its size by every measure, using the leverage of its routing borders, then we have a problem. Whether the courts or agencies can see it, we all can see the injustice, I can see it, and anyone with a sense of decency and a respect for fair competition can see it.